The squeaky voice of the fuzzy little Minotaur toddler, Minerva Mary Margret Mona O'Dell, came from the top of the prodigious paunch of one of her adoptive mothers, the Tellarite Engineer, Ensign Briaar Gavarus.

Bouncing in place, the brown-furred little bovine was doing her level best to wake up her extremely hungover mother, who began to groan in protest as the world began to come back into focus. "Ooooh, 'r you gotta stop, Minnie. 'M gonna hurl all over you."

Scooching up slightly, Minnie curled up and rolled off Gavarus' belly with a giggle, a maneuver she had clearly done before. Rubbing the bridge of her porcine snout, the rotund engineer muttered. "Good girl... uhhh, my frickin' head... where's yer mum?"

"M'ere," drifted the voice from somewhere around Gavarus' hip. "Whutizzit, Minerva? What's s'important ye've got to wake up yuir mums?" It was abundantly clear that the 'mum' in question was far from awake, as the only sign of life was a slight stirring of the mop of curls that tended to cover the diminutive Irish lass in her sleep. Which was possible only because of the nature of her sleeping position, which was curled into a rather tight ball, against the broad body of her larger partner, usually encircled by her beefy arm.

"After Hours! Today's the day yuir g'win ta pitch yuir idea 'bout a Irish pub to the Cap'n!" Minnie jumped up and down on the bed, excited at the prospect of her mums starting a pub.

Reminded of the conversation of the night before, O'Dell tried to ignore the pit in her stomach and snuggled against Gavarus. "Five more minutes willnae kill us. Coom back ta bed, wee one, aye? For mummy?" O'Dell peeked up from her sleeping position to see the miniature Minotaur eyeing her. Crooking her finger at the child, Fiona O'Dell scooted about to settle her daughter into the crook of Briaar's arm, then Fiona paid her head on the lap of the child, to try to enjoy the next five minutes with her happy little family.

"Is it five minutes yet, Mum?" Minerva whispered, peaking her head up over Fiona's red curls with a squeak to her voice, which carried a bit of her Mariposian mother's Irish brougue. It had been, in point of fact, about five seconds.

"Minnie, hun. C'mon. Just... a little more sleep, kiddo. Then we'll get up. We promise." Briaar said, gently rubbing her daughter's hair and curling just a bit tighter around the two of them. But it was clear that the irrepressible child was far more excited about the prospect than her hung-over mothers.

With a half reluctant chuckle, Briaar snorted, then sighed. "This ain't gonna work, Fee. Now my BRAIN'S frickin' awake."

"Ah knoooooow," Fiona moaned as she sat up, stretched overhead, then stretched forward onto the bed like a rather improbable ginger cat. Rolling her head around, rolling her joints and generally unkinking herself from the restrictive pose in which she was most comfortable sleeping, O'Dell looked over her shoulder at Gavarus. Rising up to her knees, Fiona turned around on the bed, to face her porcine partner. Twirling her finger to indicate to Minnie to turn about, the bright eyed child obeyed, to the approving nod and smile of her mother. Flopping herself down gently on the rounded paunch of her partner, indicating for her child to do the same, Fiona addressed them both.

"Alreet, family meetin. I got me a bad feelin aboot alla this. I think mebbe we mighta overreacted a wee tad, aye?" Those bright emerald eyes looked to the youngster and the drunkard for their input.

"Yeah," Briaar groaned out, her voice a little more gruff sounding than normal, laying on her back. "The more I think about it, the more I think giving the Pirate Queen of planet Titania a frickin' ultimatum is a real quick way to just get kicked off the ship in the worst way."

"N'..." the penitent porcine pondered as she mumbled, "We already got kicked outta ten frickin' forward. I... don't wanna know just how easy it would be for the rest of the crew to say 'don't let the door hit ya' on the ass'."

"Foook me, ye hit the nail on the head there. That's it, right there. So I've got me another idea, that maybe might sell it easier. tell me whatchye think, aye?" With that said, Fiona leaned in a bit more toward the Minotaur babe, crowding both of them on the side as they leaned in toward Gavarus' snout. "What if we ASK the cap'n for permission to start our own pub, because if we're the ones runnin it, we won't be imfringin on innyone else's good time. Ye want a nice quiet drink, go to 10-For'd. The loud drunks are all at After Hours."

"It'll put the shoe on the other foot, makin us run the pub. So what d'ye say ta that approach?" Fiona looked both girls in the eyes, seeking input. Minnie looked to Briaar expectantly, looking to take a cue from Mom.

"Soooo... instead of an ultimatum, you're thinkin'..." Gavarus worked Fiona's thinking out to the best of her ability. "You're thinking... she IS a frickin' Pirate. Her and those freaky ass Baronesses and, like, the L-C. They all get off on loud ass, rowdy bars. We appeal to her OWN interests. This can be the place where she don't have t' BE all Captainy and shit."

"Aye, and it dawns on me, likely the best way to get Herself ta shove ye oot of an airlock is to hand her an ultimatum. The queen'a 'live free or die' isnae likely ta take a 'no options' plan well. I kinda figured it oot when I thought aboot it NOT drunk and imaghinin her response nearly made me pess meself. Speakin'a a which... c'mon. manure maiden. If I've got to pee, likely ye've got to pee, and we hafta get offa yuir mum so's she kin pee. C'mon noow!"

In the expanded family quarters was a considerably larger bathing facility as well as reclamators. In the O'Dell/Gavarus household, there was one large throne, complete with filtering exhaust fan built in. Then two rather petite toilettes, so that the entire family could relieve themselves simultaneously. As was the case in the moment, with all three relieving morning bladders, and a bit more in Minnie's case. Again, the internal filtration fans kept the stench down to a mere whiff of unpleasantness. Which was important when dealing with Minotaur poo, as it turned out.

One of the advantages of the pungent porcine being an engineer.

With an exaggerated sniffing and a broad wave of her hand in front of her snout, Briaar turned towards the tiny Minoatur as they were attending to their business. "Wooo WEEEE!!! I think you got me BEAT there, Minnie!

"YUUUUUP, I'm gonna have to make more chilli if I'm gonna keep up with you, kiddo." Gavarus said, making, of all things, potty time into a game with their beloved daughter.

"Jaysis, nooo. Some of us still breathe through our noses, fr'crissakes..." Fiona rolled her eyes in mock lamentation.

Then, after a few minutes, the unlikely trio finished up and went through the motions of cleaning themselves up for the day. A few sonic showers later, and Gavarus had a concerned expression on her face. "So, Fee. I was thinking about shit in the shower, and I was thinking. Uh... even if we make the best pitch in the quadrant, what if the Captain still says no? I mean... whadda we do, then?"

"Well, then we sook it oop and try ta make nice wi' the staff at 10-Forward, or we start drinkin at home," O'Dell explained as she stepped into her uniform slacks. "I mean, I dinna like either of those options, but tis the only drinkin hole on the ship. But, again, we get anything we want from the replicator , so... I dunno. I'll admit, I dinna like how they went aboot it. Seemed like a bit of a dirty trick, and nae like they talked to us aboot it forst or nothin. No warnin's joost..."

At that, Fiona's non-drunk mind began replaying numerous warnings given to them by the staff of the lounge over the past few months. "Or maybe not completely oota the blue..."

"Ugh." Gavarus groaned, looking on the dresser for her commbadge and single, gold rank pip as she groused. "What are we supposed to do? Go in and kiss their asses and pretend like they didn't set us up to make sure that no matter what we did, they were gonna kick us out?"

"I've got to admit, I'd rather chew broken glass than go crawlin back into 10-For'd," Fiona admitted. "So if it's a no go for our own place, I guess our quarters will be the new pub. Aye Minnie?" Fiona asked, as she pulled a pretty pink dress over Minnie's head, buttoned it and began brushing the cheerful child's hair into the bow that topped off her precious appearance.

"So... I guess we better do a damn good job of convincing the Captain that our pub is a frickin' great idea. Cuz I don't look forward to having to crawl back in there." She said, digging through her messy underwear drawer, still in search of her badge and pip.

"Unless she orders us to do it, I dinna plan to," Fiona admitted. "So aye, I'll be as convincin as possible. Whattye say, hit her oop after our shift? Or before work this mornin?"

"Momma!" Minnie said excitedly as she popped out of the pile of laundry in the corner from the night before having fished out Gavarus' commbadge and rank pip. "I found yuir thingies."

"Aw, shit. Thanks. You're my fuzzy little angel," Gavarus said, leaning down to take the badge and pip that the furry, horned child was holding out excitedly.

Pinning both in place on her blue, R&D tunic, she adjusted the little bow, with the same exact blue color, on Minnie's dark hair and smiled as she turned to Fiona. "I dunno. I mean... I wanna just put it off and not deal with it, but... then I'll be thinkin about it all damn day, ya' know? An' we got tests we're supposed to run on the new inertial dampeners for the Cyclones and... you're a frickin' test pilot. I can be distracted and shit and it's usually no big deal. But..."

Hemming and hawing, Gavarus was trying to skirt the point for a bit before just spitting it out. "I think... we should see if we can just... get it over with, I think. Whadda you think?"

"Aye, no sense in puttin it off. Let's go walk the plank." 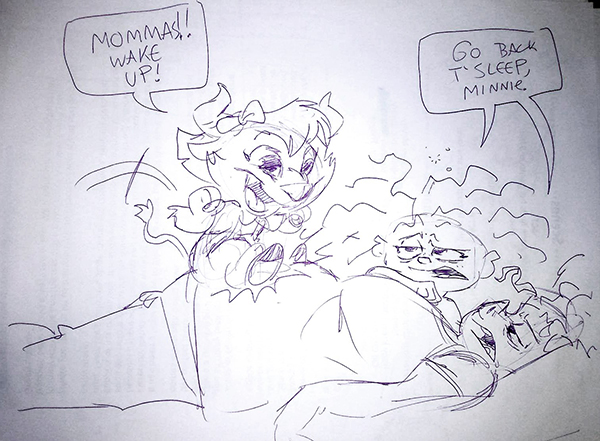